Authors who shaped my thinking before I turned 18

My mom instilled in me a love of reading. Before I turned 18, I had read Mahabaratha and Ramayana - the two great Indian epics, many short stories, and other historical novels.

We didn’t have a TV or an iPad or a movie theater in our town, so I was mostly in the library. Our neighbors knew I would either be at home or in the library during the weekends. Such was my passion for reading.

I read what was available in the library, which was mostly around Tamil philosophy and history.

Ellen Fishbein, a writing coach, and a poet reminded me of these when she asked me a question on Twitter:

I’m curious - If you had to choose only one, which book had the most profound impact on you BEFORE you turned 18?

Though Ellen asked about a book, I recollected the authors who influenced me the most. Three Tamil authors had the most impact when I grew up - Valluvar, Bharathiyar, and Kannadhasan. 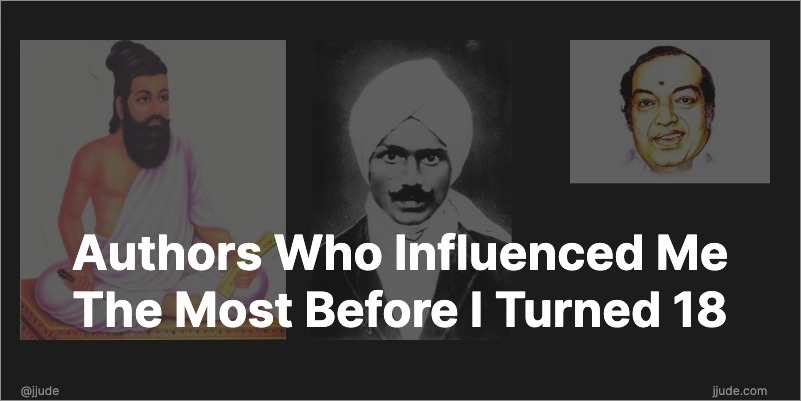 Of the three authors, Valluvar had the most impact. He wrote Thirukural, ancient literature dated any time between 300 BCE to 5th century CE.

Let me give you a few couplets from this marvelous book:

When a cart is loaded full, adding even one more peacock feather will break its axle.

When I pack my day to the full, my son’s tiny interruption will trigger anxiety, and I’ll lose temper. Instead, I focus on essential tasks for the day, and even then, I stuff enough buffer between tasks so I can go about my day relaxed.

Read If you see everything, you’ll get nothing 🎯 to find out how I identify important tasks

I want my mom to rejoice often. So I built my life with wisdom and reputation as foundation stones.

The deeper I learn a domain, the more capital I’ve to bank on. I formulated a learning framework, to pursue multi-disciplinary learning in life.

(The answer to Ellen’s question then is, Thirukural)

Kannadasan is another author who influenced my thinking. He is well-known for his film songs and rightfully so. Here is one couplet from his countless movie songs.

In the Hindu mythology, a snake adorns Lord Siva’s neck. From its safety, the snake prods the well-being of its predator, the eagle. The eagle replies, if one stays in a safe place, it is all well and good. I appreciate this song even more as the world is battling the COVID pandemic. I’m thankful that I’m safe in every way - psychological safety with family, financial safety with a stable income, and physical safety with a large house. If you live long enough, work long enough, or run a business long enough, you’ll encounter predators. Knowing this, I’ve built my life on a rock.

His masterpiece was not his movie songs, but a treatise on Hinduism called Arthamulla Indhu Madham( Meaningful Hinduism). He explores the meaning of traditions of this ancient religion, at least as practiced in Tamil Nadu. I remember many of the traditions he unraveled, but here I recollect just two:

On top of every Hindu temple, there is an inverted pot, called Kalasam, which are filled with food grains. In times of floods or disaster, the grains are planted to restart agriculture.

His point is that religious traditions are not out of illiteracy, as portrayed usually in the media. Instead, they are pragmatic to the continuation of the society.

You don’t have to embrace every tradition as is as illustrated in this tradition:

Early Tamilians served food on banana leaves. Before eating, they will take a cup of water, sprinkle drops of water around the leaf and drink the remaining water. The practice was, as per the traditional belief, to seek the blessings of deities.

Kannadasan analyses this habit in detail. In the olden days, the floors were of mud which attracted insects. The sprinkled water kept these insects from wandering into food. This practice was incredibly helpful in the night as a source of lights wasn’t available for everyone. What about drinking the remaining water? Drinking water before eating prevents hiccups.

As we have moved to the dining tables with enough lights around us, we don’t face the dangers of insects marching into our food plates. But, we still face risks of hiccups. So we should let go of one and keep the other.

Instead of cynically dismissing traditions, analyze and adopt the suitable ones. Since reading Kannadasan’s book, I have studied the fittest ideas that survived for centuries, embraced a few of them, and greatly benefited from them.

Bharathiyar was a revolutionary not only because he fought against the British but also against the evils of the society.

He wrote against caste discrimination:

He was far ahead of his time to believe women as equal to men. He called women to modernize and break the shackles of the society.

He also wrote against poverty and religious divisions.

I reserved the best for the last.

Among all the languages we know, we do not see anywhere, any as sweet as Tamil

In today’s polarised bigoted world, everyone seems to take a “position” without ever finding an iota of information about the other side.

“Non-veg is the reason for climate change.”
“Data shows, coffee and chocolate impact climate more than fish and poultry.”
“Nobody is interested in your data.”
🤦

Like Bharathiyar, if we open our eyes and learn widely maybe we will be solutions rather than problems.

Reading is the leverage I have in my life. When my mother paid five rupees as a library fee every month, I didn’t grasp the enormous impact that a small amount would have on my life. That was probably the best thing that happened in my life. Oh, wait. My mom was the best thing in my life. I don’t intend to repay her. I can’t.

And thank you Ellen for triggering a nostalgic journey into the magical past.