Where There Is Vision, People Prosper

Indians are optimistic in nature. Studies prove that. This optimism is on display in conferences, group chats and interaction with entrepreneurs. Everyone is confident that the future will be bright.

But, what that bright future will look like? What skills do we need to reach to that future?

There is no answer. We are all happy running in an optimistic treadmill.

In the words of Peter Theil, we are all indefinite optimists.

In his book Zero to One: Notes on Startups, or How to Build the Future, Peter Theil, places people and societies into a 2 X 2 matrix. 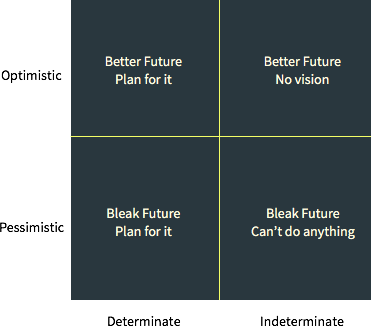 Will Price sums up this classification in his LinkedIn post

A definite optimist says, “I believe that this nation should commit itself to achieving the goal, before this decade is out, of landing a man on the moon and returning him safely to earth.”

While an indefinite optimist says, “There is no reason to be disappointed. India will progress very fast and the skills of our youth will take India ahead.”

One nation raised itself to meet that clear vision. Another remains an ’emerging super-power.’ For ever.

This isn’t just the state of the country. Many entrepreneurs, too, cultivate this mental model.

He went about doing it. In a decade he achieved his master plan. That’s the power of vision.

I enjoy reading Jeff Bezoz’s shareholder letters, because it is succinct, bold, and in them, he explains his long term vision. In his 1997 shareholder’s letter, he laid out his long-term plan in the section appropriately titled: “It’s all about the long term.” His plan was, lower margins lead to market leadership, market leadership translates “directly to higher revenue, higher profitability, greater capital velocity, and correspondingly stronger returns on invested capital.” His decisions have consistently reflected this focus. Would you say he achieved this?

As a definite optimist, you analyze the marketplace, figure out what you can achive with your strengths, and place bold bets. Then, you work out a strategy to make that bet come true.

It is simple, but not always practiced.

Time to time, someone comes along and shows us what definite optimism can achieve. They change things. They push us forward.