Book Notes - How I Almost Blew It

Journeys of Indian startup founders, who had a near-death experience, almost shut-down but survived to succeed

Most books on startups focus on American entrepreneurs. Indian entrepreneurs have to content themselves with derived knowledge from these American books. Sidharth Rao, an investor and a co-founder, is bridging that gap with his new book, “How I almost blew it.” He is narrating the journeys of seventeen Indian startup entrepreneurs, who had a near-death experience, almost shut-down but survived to succeed.

Having been in the advertising industry, Siddarth knows a thing or two about the psychology of readers. Instead of arranging the book topically, he dedicates one chapter to each entrepreneur. That way, readers can choose the reading path. Since every chapter is organized in a similar pattern — how they started, how they blew up, and how they recovered, the book is easier to read, and the lessons easier to grasp.

The impression created in the newspapers often is that the policies of government hinder and create havoc for businesses. I was surprised that none of the entrepreneurs mentioned government policies as a cause of their fiascos. Is it because these are all Internet companies? I don’t know, but I would like to think so.

I’ve listed some of the interesting points from the book. Take this as a starting point, but you should read the book. 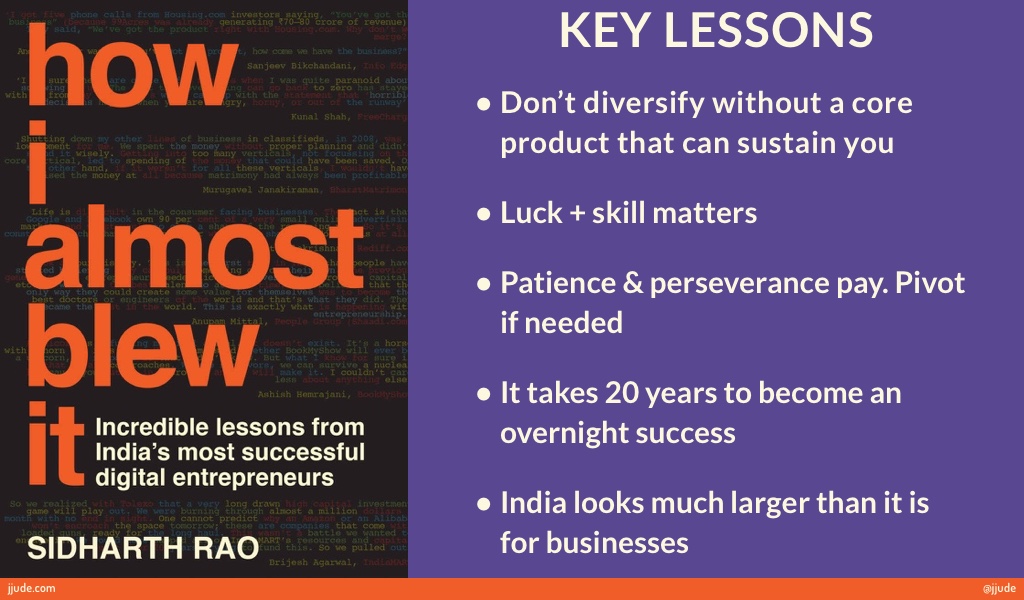 Buy it from Amazon.

I got this book from Tribune Chandigarh to write a review. You can read my review at the Sunday Special page.